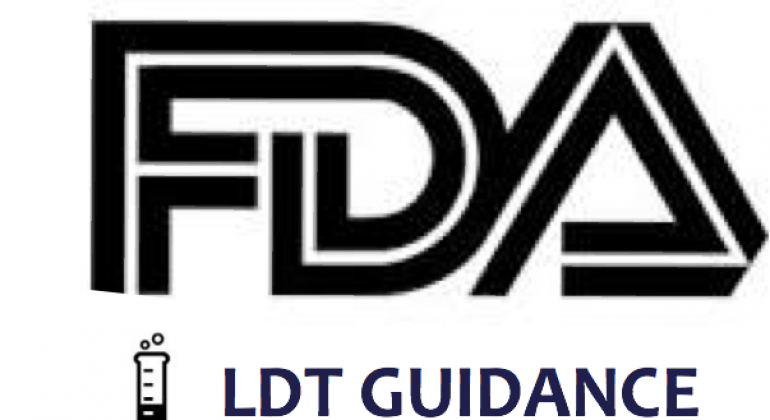 On July 31, 2014, the FDA provided to congress the “anticipated details” of its draft Guidance describing its framework for Laboratory Developed Tests (LDTs) and Companion Diagnostics (CDx) guidance.

In the FDA press release they indicated they were reinforcing their commitment to personalized medicine and taking “steps to help ensure the reliability of certain diagnostic tests.”

As requested by Congress, this draft of the document was prepared “for the purpose Notification to Congress Only.”

Notification to Congress Regarding LDT Regulation

The FDA defines the LDT as “a diagnostic test intended for clinical use and designed, manufactured, and used within a single laboratory. ”

The agency cites reports of patient harm and concerns about inaccurate, unsafe, ineffective, or poor quality LDTs that have not been properly designed and evaluated for analytical and clinical validity.

On initial reading of the document, the FDA indicates that for high and moderate risk LDTs, they intend to enforce regulatory requirements with a 12 month, 4 year, and 5 year phase-in based on risk including:

The proposal includes “third-party-reviews” of certain tests based on risk.

There is additional discussion in this New York Times Article and this Forbes Magazine Article.

The FDA also published a final version of the Companion Diagnostic guidance today:

In Vitro Companion Diagnostic Devices Guidance for Industry and FDA

As in the original document, FDA will apply a risk-based approach to determine the regulatory pathway for IVD companion diagnostic devices, as it does with all medical devices.

Since that time, advanced diagnostics and personalized medicine have proven to have a huge value in improving the delivery of patient care, improving patient health, and reducing healthcare costs.

The FDA estimates there are more than 11,000 laboratory developed tests available on the market today.  The most widely used commercial Laboratory Developed Tests (LDTs) on the market today include Myriad Genetic’s BRACAnalysis® Hereditary Breast and Ovarian cancer test and the Oncotype DX® Breast Cancer test from Genomic Health.

Today, these laboratory tests ARE regulated under the Centers for Medicare and Medicaid Services (CMS) under the Clinical Laboratory Improvement Amendments of 1988 (CLIA) and state law, but supporters of additional regulation warn that they may not go through rigorous clinical validity analysis and review.

Professional laboratory organizations such as the American Clinical Laboratory Association (ACLA) responded and are supportive of adding requirements to address gaps, but recommend doing so under the current regulatory framework rather than imposing an additional layer of regulation under a framework that was primarily focused on medical devices not laboratory tests.

Significant innovation and adoption of such tests has come only as they have been clinically validated, listed in national guidelines, and have gone through extensive review and reimbursement challenges under the current CLIA framework, oversight, and accreditation groups such as the College of American Pathologists (CAP).

I was not expecting the FDA to announce a planned release of the LDT guidance this summer.  I’ve personally seen laboratories focus on improved clinical trials and validation under the current regime — however the FDA has now taken the first step on a path to inserting itself into the process.

While more regulation may weed out some “bad players” and prevent laboratory “shortcuts”, the costs of additional FDA compliance work, delays in time to market, and challenges with market adoption and reimbursement could have a significant negative effect on laboratories in the diagnostic space and development of diagnostic tests.

It is not clear to me that FDA has the bandwidth and resources to handle adding laboratory testing to its roster of activities.

Expect again a renewed about of activity, conversation, and arguments against regulating LDTs through the FDA framework in the coming months.

CDHR held a webinar regarding the draft Guidance Documents on October 23rd, 2014

The FDA has scheduled an open public workshop regarding regulation of LDTs:

The meeting will be held in Bethesda, MD and will be webcast.  Individuals and companies can register to attend or speak at the workshop.